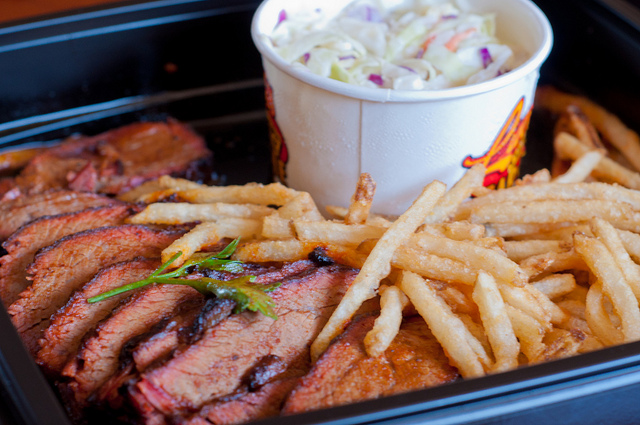 Kansas City is the “Home of BBQ,” so when you say goodbye to your Kansas City Moving Company, you might want to head straight to a local joint to chow-down on some seriously tasty barbecue. There are over 100 barbecue restaurants in the greater Kansas City area to choose from, but there are a few local favorites you’ll want to be sure and check out.

1. Fiorella’s Jack Stack Barbecue in historic County Club Plaza is a must. This sit-down restaurant is the place to go for a nice, slow meal. You can get the VIP treatment in one of four special booths complete with your own television. They pride themselves on the high quality of their raw ingredients, and that they prepare all their foods from scratch. Their brick pits smoke with 60% hickory and 40% oak woods, where the meat is seared, then moved to a rotisserie smoker to slow cook. Also on the menu is rack of lamb, seared tuna and artfully crafted entree salads.

2. Oklahoma Joe’s Barbecue and Catering opened in 1996 inside a gas station building, with a company owned liquor store next door. They are known for their barbecue rubs, and the fact that they smoke with Missouri White Oak. You can find other things on the menu such as red beans and rice, and smoked chicken gumbo.

3. Visit the original Arthur Bryant’s Barbeque on Brooklyn Avenue for an authentic Kansas City experience. Their meats are slow-smoked with a combination of hickory and oak woods and then slathered with their original or spicy sauce. Former Presidents Harry Truman and Jimmy Carter made their way to this restaurant, and so should you.

4. Danny Edward’s Famous Kansas City BBQ started out in as an 18 seat restaurant with an “eat it and beat it” motto. Now in a larger location, they took their pink concrete pig mascot with them and kept on serving the same slow-smoked brisket and Texas-style sauce. This is a causal place where you order at the counter. Don’t miss the hand-cut, thick-sliced, hickory-smoked brisket sandwich.

5. BB’s Lawnside Blues and BBQ is the place to go for food and music. BB’s boasts world-class blues entertainment live on Thursday through Sunday. For 20 years they have served slow roasted meats from a 60-year-old pit. They also serve Louisiana dishes such as jambalaya, red beans and rice, and gumbo.

You’ll be glad to see your Kansas City Moving Company truck roll away so you can get out to one of these fabulous, tried and true barbecue joints.