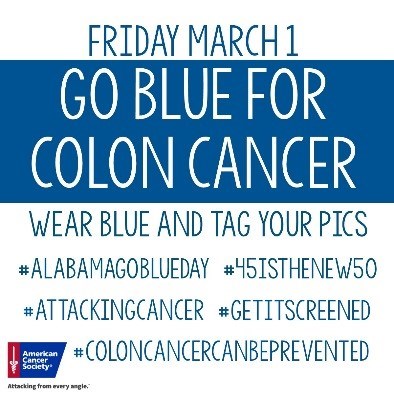 The American Cancer Society is encouraging Alabama to GO BLUE by wearing blue on Friday, March 1 in recognition of Colorectal Cancer Awareness Month. Colorectal cancer is the second leading cause of cancer death in the U.S. when men and women are combined, but it doesn’t have to be.

“When adults get screened for colorectal cancer, it can be detected early when treatment is most likely to be successful,” said Jimbo Loftin, SR V.P. of Field Operations for Coleman.. “In most cases, it can be prevented altogether.”

About 1 in 3 adults between 50 and 75 years old – about 23 million people – are not getting tested as recommended. Deaths from colorectal cancer have dropped by over 30% in the U.S. among adults 55 and older in the last fifteen years, in large part due to screening. Further, people need to know that symptoms such as weight loss and blood in the stool – regardless of age – are a cause for concern and must be reported to their doctor, and to tell their doctor if they have a family history of the disease.

The Go Blue Day efforts are in collaboration with the American Cancer Society’s involvement with the National Colorectal Cancer Roundtable’s (NCCRT) 80% in Every Community Initiative, which continues the progress and commitment from 80% by 2018. The mission is to increase colorectal cancer screening rates to 80% in every community.

“Since the launch of the 80% by 2018 campaign, screening rates nationwide have gone up,” said Mr. Loftin. “Additionally, because of the upward trend of colorectal cancer diagnoses among young adults, the American Cancer Society updated its screening guidelines saying colorectal cancer screening should begin at age 45 for people at average risk.”

In addition to wearing blue on Friday, March 1, the Society is asking everyone to share their photos and stories of inspiration on social media.

“Screening can save lives, but only if people get tested,” said Mr. Loftin. “We want everyone to join in this movement because despite our progress, work remains.”

About The American Cancer SocietyThe American Cancer Society is a global grassroots force of nearly 2 million volunteers dedicated to saving lives, celebrating lives, and leading the fight for a world without cancer. From breakthrough research, to free lodging near treatment, a 24/7/365 live helpline, free rides to treatment, and convening powerful activists to create awareness and impact, the Society is the only organization attacking cancer from every angle. For more information go to www.cancer.org.