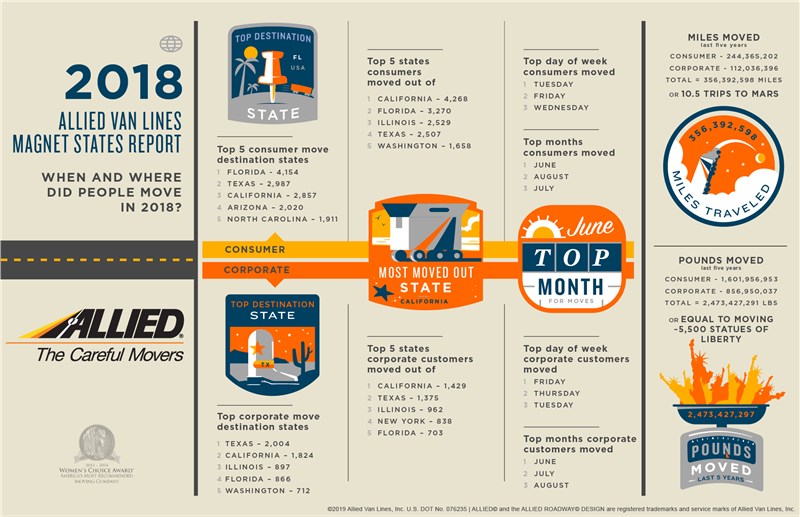 The top five destination states for consumers who moved with Allied in 2018 in highest to lowest volume order were: Florida, Texas, California, Arizona and North Carolina. Florida has ranked as the top move destination for Allied consumers for the last five years. Allied appears to be the mover of choice for the hundreds of thousands of ‘snowbirds’ who move to Florida each year for the warmer climate, no income tax and low property tax rates.

For corporate moves, the highest volume destinations were to: Texas, California, Illinois, Florida and Washington. Since 2010, 121 corporate headquarters have moved to Texas from around the nation including Toyota, FedEx, Charles Schwab Corp., Jamba Juice and JP Morgan Chase. The lone star state’s business-friendly climate, lower cost of living and educated workforce make it a highly desirable destination for businesses looking to grow and streamline operational costs.

Other interesting data points from Allied moves in 2018 include:

“We are an essential part of the nation’s economy and get a first look into the evolving trends of people’s preferences on where they want to live and work,” said Lesli Bertoli, general manager and vice president of Allied Van Lines. “Studying the Magnet States Report each year gives us insights that enable us to provide better service to our consumer and corporate customers.”

Allied's 2018 Magnet State Report.- An infographic by the team at Allied Van Lines